I just returned from Vancouver earlier this week from a really awesome inaugural half-marathon, the Lululemon Sea Wheeze! I am a big Lululemon fan because they make nice, comfortable clothes. Since running is such a mental sport, if you feel good about what you’re wearing, you’re more likely to perform well. As soon as I heard about their half-marathon back in January, I immediately signed up and got my friend Amy to register with me. The price was a little steep at $128 CAD, but you do get what you pay for. It includes:

The Sea Wheeze showcase store–very picked over by the time I arrived post-race (it was open for 1.5 days)

I was really looking forward to the race expo, because I knew there would be limited-edition product available ONLY at the Sea Wheeze showcase store on race weekend. Unfortunately, I missed the expo completely and first dibs on the stuff due to a 7-hour mechanical delay on Air Canada. It was SO frustrating. I was supposed to arrive at 2:00pm into Vancouver and I didn’t get to my hotel until 9:00pm, completely exhausted from all their shenanigans. I am probably not going to fly them ever again. Luckily, Amy got there mid-day and was able to get me a pair of shorts, when I frantically instructed her to buy me “anything that fits me” under $60. I pretty much knew that the stuff would be picked over by the afternoon since the expo opened at 9:00am. Oh well, next time I’ll get there on Thursday!

I got to stay at the Four Seasons in downtown Vancouver with Amy for a ridiculous rate, since she works for them. It was a beautiful hotel only a 10-minute walk to the race start, which made my life so much easier after my flight delays.

I will post a much more detailed part two later, but I just wanted to share some photos below. I’m gearing up for the Beast of Burden Summer 100 this weekend—so nervous but also excited!

Beautiful course along the Seawall in Stanley Park 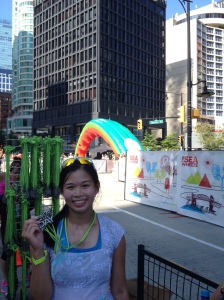 I'm a marathoner and ultrarunner who loves to eat! Wants to encourage other people to run, connect through foodie adventures, and live every day with positive energy.

Races on my mind